A performance cruiser, CAP II is more than a fantastic sailing yacht; she is luxurious and comfortable, and a joy to be aboard. She is operated from her aft cockpit, leaving the center cockpit for her guests to sun, sightsee and enjoy al fresco meals. A powerful sailing machine, CAP II is very stable, offering her guests a smooth, comfortable ride. Luxurious cruising accommodations aboard CAP II are for six guests in three well appointed double staterooms with ensuite bathrooms. You set the pace and itinerary aboard CAP II; your professional, courteous crew will do the rest.

Cap II is not advertised for charters in the US and does not charter in US waters.

CAP II can accommodate 6 guests in three spacious double cabins (two forward and one midship) each with ensuite heads and cupboard space. The two forward cabins can be converted into a large primary suite due removable dividing wall that can form one large cabin.

Technical Specifications for the Sailor in You! 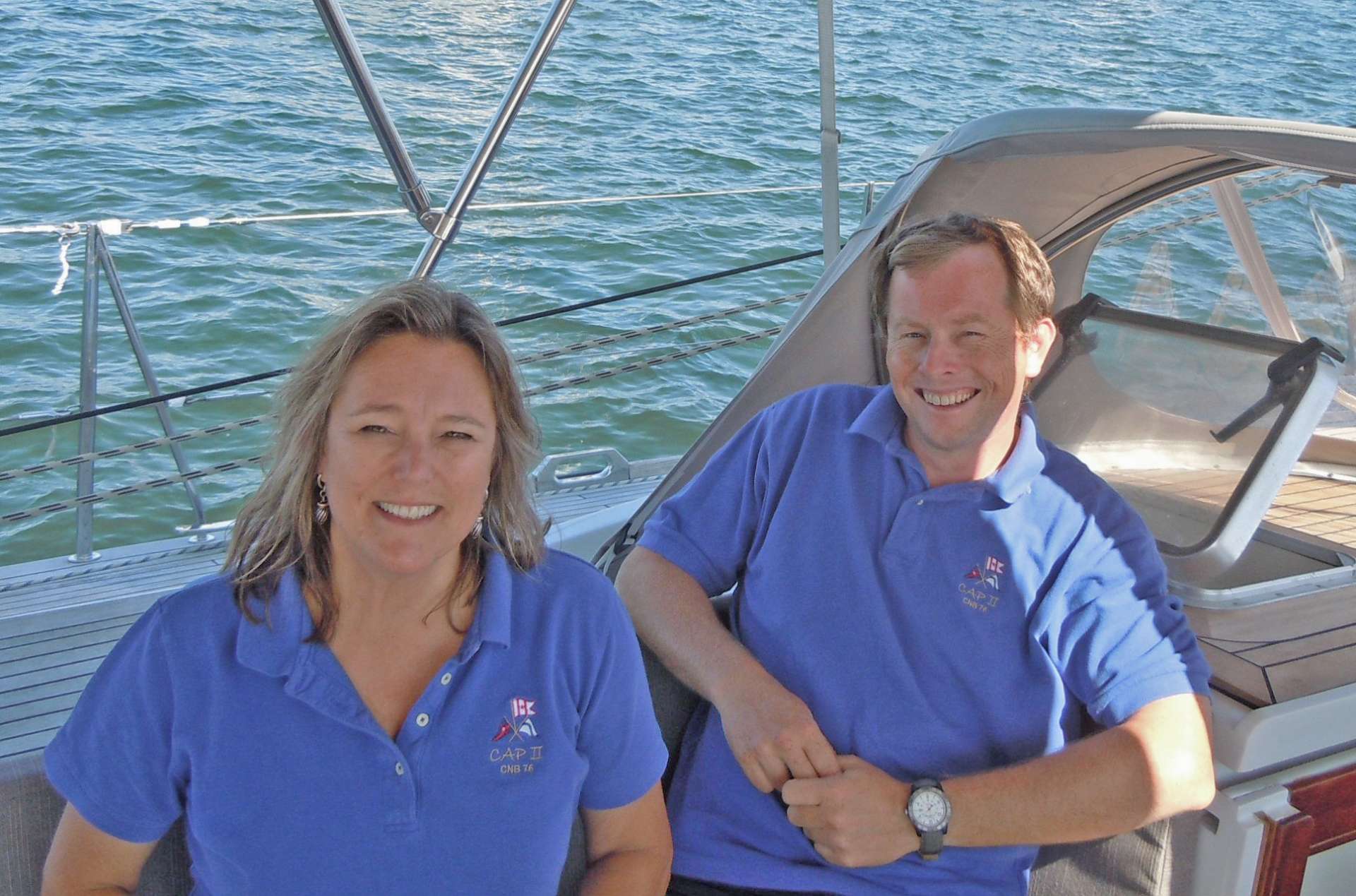 It took Keith working as a school teacher to learn the lesson that the call of the sea had a far greater appeal than the call of the classroom. Having a long standing interest in history and current affairs had led Keith into academic study that culminated in teacher training and work in English high schools trying to impart this passion on our future generations.

Then sailing was discovered, along with the realization that his own passion for teaching was not as powerful as his passion for sailing. It was sailing in its purist form that led to this conversion – that is, dinghy sailing. Instead of extolling the virtues of political participation Keith found himself, instead, describing the combination of art, science and physical endeavor which is needed to make a machine move through the water to the point where it only seemed sensible that he leave behind an established profession and move into the little known world of ‘professional yachting’.

Keith added to his Dinghy Instructor qualifications with a Yacht Master ticket and has since worked on a range of boats from racing yachts to even a motorboat, when needs called. He worked a complete season as a flotilla skipper in Greece and then went on to work as a delivery skipper taking newly built yachts from France to Greece and Turkey. A transatlantic crossing on a 36’ catamaran brought him to America and then the Caribbean.

Keith joined CAP II after working on a well-known race boat that spends part of the year in the Caribbean. It was during this period that he met Dina, whose calm demeanor wasn’t even rattled cooking for, and sharing a boat with, 18 sweaty ocean racers for a week. This composure was invaluable as Keith and Dina took over CAP II and led her through an extensive refit in Trinidad that has restored her back to the splendor that such an elegant boat deserves.

Though originally from Pennsylvania, USA, Dina has lived in Japan, the Philippines and the Cayman Islands. Her wonderful life as CAP II’s Mate and qualified US Captain is further affirmation of her love of the sea. When she was a youngster she lived by a pearl farm near Kyoto, then on the beachfront in the Philippines.

When her father’s business took the family back to Pennsylvania some of the culture of those places remained. Dina is an endearing sort of creative genius. She rebuilt race car engines as a teenager, designed and produced jewelry, and remodeled houses. She drove across the Untied States to the Gemological Institute of America to experience the country and further her career as gemologist, goldsmith and appraiser. Conveniently, for someone imbued with a fascination for travel and cultures, her training as a jewelry designer took her to places as diverse and exotic as Florence, Italy and Brooklyn, New York.

Not satisfied with exhibiting her gold orchids at the National Arboretum, or operating her own appraisal company and gemological laboratory, Dina’s sense of adventure got the better of her. Moonlighting as a hot air balloon pilot, and owning sailboats on the Chesapeake, perpetuated the voyage that began by the pearl farm in Japan. In 2010, Dina sailed from Fort Lauderdale to Antigua as Mate on an old 11m sailboat. Luckily, her mechanical abilities and fortitude assisted in holding the vessel and captain together and, with string and ingenuity, they arrived in one piece.

Experiencing the opposite, Dina left Antigua on a luxurious 31m motor yacht but jumped at the chance to cook on a racing yacht. As fate would have it, Keith was Mate on this yacht and they later began to search for a charter yacht to run together. Experience, determination and great team work lead them to accept the honor of restoring and running the incredible yacht CAP II. Her resurrection has been a labor of love and dedication with the reward of seeing this true sailing beauty shine!

Cap II is not advertised for charter in the US and does not charter in US waters.